The Calcarea Carbonica - A Pearl inside an Oyster Shell

A pearl inside an oyster shell is describe as - 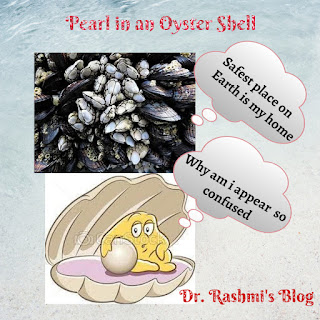 First, Oyster shell is thick, impenetrable and protecting the completely defenseless creature inside it- : Oyster use their shell to protect their soft, delicate creature and which help them to protect them from any danger. They live harmoniously in the oyster banks and never leave their home. People who need Calcarea are also soft, sensitive and they  feel secure in a very close connection with their home, their family, friends or their surroundings and feel insecure and threatened without them. Calcarea needs stability and security and  protection. But method of protection has a passive character. They wait, rather than act. So, he seeks the protection by expressing a lot of fears. (Fear of Heights, fear of mice, fear of insects, fear of dark, fear of rats or dogs, fear of illnesses). They withdraw themselves inside this hard protective shell, when they are against an intrusive or inimical environment or against the stronger beings that surround him. The principal defense of this weak and vulnerable creature, is to withdraw into himself. They are very sensitive or fearful about cruelties. He does not like stories or newspaper accounts of violence. (Fear excited by reports of cruelty) and he will refuse to look at war, fighting and horror movies or read a book depicting cruelty in the protective home, parents and surroundings.

Second, Oyster shell has an animal which is cold, pale, moist, lump, inactive -: In any situation of activity, Calcarea's major problem is to gather up the energy to play the role. Aware of this weakness, they work relentlessly all day for fear of being unable to resume their chores once they stop.

According to Boericke, "Exertion produces a jaded state- mentally and physically".

Thats why they feels better when constipated. Calcarea male has extreme weakness or irascibility after coition is another "worse from exertion" symptom. A peculiar aspect of Calcarea's inactivity is that Calcarea prefers  non-stimulating bland food likes starchy, creamy and dairy foods, such as potatoes, all forms of pasta, bread and butter, peanut butter, whipped cream, ice cream, milk and cheese and may dislike strong-tasting or spicy dishes. He "averse to meat" which is  the symbol of energy and stimulation. On the mental level, he possesses a full range of intellectual capacities but absence of qualities like ambition, energy and drive and disinclination for work, he shows inactive by being too easygoing, too resigned.

According to Hahnemann, "Indisposition or aversion or repugnance to all work ...even while conscious of his powers" (i.e. laziness).

Because of disinclination to work make them worrying about what others will think about them. So Calcarea expressed in the symptom, "Delusion that others will see their confusion", yet they are not so incapable as they appear. (Fear of his state being noticed or easily feels watched by others).This fear that others will not think them good enough leads a great sensitivity to criticism. They are especially sensitive to being criticized in public. (Fear of disapproved, fear of loss, fear of poverty, fear of future, fear of something will go wrong). Another protective technique against too much external pressure is "obstinacy". Their stubbornness may be manifested in the form of self-assertiveness. He is a procrastinator,  they postpone what he knows must be done. Calcarea can be very obstinate and can be even get aggressive but this behavior is reveal only to within their home or in their familiar environment.

Third, inside this oyster shell a creature which grows a pearl of polished and delicate beauty, from steady concretions around a grain of sand.- The oyster forms a perfect, lustrous pearl, but if the  grain of sand will not enter into its amorphous organism, the pearl will never be formed. By the same expression, if the Calcarea child is deprived of a necessary irritating stimulus, he may become an undeveloped, inexperienced naive adult, who has slow reflexes, late in completing his studies and settling down his career or finding a niche in society. Therefore he cannot develop by himself but he  preferably demands individualized, organized guidance from outside like from parents and from outer environment in the form of motivation.

Whole of the 18 th century in Europe marked by plethora of theories and hypothesis concerning the nature of disease and its causation ⇩...