The mind and body are not two separate entities but they form an indivisible whole or we can say inseparable but distinguishable by mind for easy understanding.

The mind is a general term for a person that thinks, reasons, perceives, wills and feels.

The mind  has two distinctive characteristics-


You receive conscious perception by means of your five physical senses and exercise control over the movement of your body and nerves in the brain are channel of your volitional and conscious mental action.
Humans have an absolute power to control over the information that enters through the five senses. You will get a response from your subconscious mind according to the nature of the thought or idea you have in your conscious mind.
Your subconscious mind may be compared to the soil, which will grow all kinds of seeds (thought), good or bad. The dominating thoughts, if it is a strong emotion (faith, fear, love and so on) or strong desire, that remain in the conscious mind (negative or positive) make their way to the subconscious mind and influence and empowers it.

According to J.T.Kent- “Thinking and willing establishes a state in man that identifies the condition he is in.”

The law of action and reaction is universal. Your thought is action and the reaction is the automatic response of your subconscious mind to your thought.
In The Science of Homeopathy, George Vithoulkas  explains that "The mental level is the most crucial level for the human being. It is the mental and spiritual content of a person which is the true essence of that person".

Samuel Hahnemann himself emphasized the importance of the mental and emotional state. In the Organon, aphorisms 210 and 211, he wrote, "In all cases of disease to be cured, the patient's emotional state should be noted as one of the most preeminent symptoms,"

Rajan Sankaran writes in The Spirit of Homeopathy that "the most marked difference between two individuals suffering from the same condition lies in their mental state and in their general symptoms" and that by basing his remedy choice on the mental state he has successfully.

According to J.T. Kent- “As are the will and understanding, so will be the external of man. As the life of man or as the will of man, so is the body of man, and as the two make one in this world, there is evolved from him an aura which is vicious in proportion to his departure from virtue and justice into evils.”

You are saturating your subconscious with the negative thoughts and it responds accordingly. So you are actually blocking your own good, as a result of bringing lack, limitation, and frustration into your life.When you set up obstacles in your conscious mind, you are denying the intelligence of your subconscious mind.
This causes  mental and emotional congestion followed by sickness and neurotic tendencies. Whatever thoughts, beliefs, opinions, theories you  engrave on your subconscious mind, you shall experience them as the objective manifestation of events, conditions and circumstances.
If you think negatively, destructively and viciously, these thoughts results in destructive emotions. Each mental state is associated with  a positive or negative effect felt in the physical body. For example, the mental state of anxiety causes production of stress hormones.

"As water takes the shape of the pipe it flows through, the life principle in you flows through you according to the nature of your thoughts."

If your conscious mind preoccupied on obstacles, delays and difficulties, your subconscious mind responds accordingly. Thoughts of jealousy, fear, worry and anxiety brings mental and physical diseases of all kinds. All your frustration is due to unfulfilled desires.Therefore these two must balance, then there will be harmony and equilibrium. So to let the life principle flow through you rhythmically and harmoniously, the impression and the expression must be equal.

Different Editions of Organon of Medicine

During the life time of Hahnemann, there were 5 editions published and 6th edition was published posthumously (after death). Organon was originally written in German language by Dr. Hahnemann.
This book has been written in 294 different aphorisms or paragraphs. These aphorisms are given serial numbers and separately explained. Some aphorism are with footnoted to explain the aphorism to some extent.


"The truth we mortals need,
Us blest to make and keep,
The All-wise slightly covered over,
But didnot bury deep".

What is Organon of Medicine

The word Organon has been derived from a Greek word "Organum" which means itself derived from ergon and so meaning something by which a task is accomplished. The name Organum gave rise to the modern everyday term organ.

According to Dr. Richard Hughes- " An instrument for effecting in best manner a certain end".

Organon is written in an aphoristic style as Lord Bacon wrote his 'Novum Organum' in the same style and Hahnemann was influenced by him. This book based on inductive logic. This book is the rule book of Homeopathic system of medicine and it contains basic principles of Homeopathy and Hahnemann also criticized the prevailing systems of medicine in this book. Organon of Medicine was originally written in German language by Dr. Hahnemann.

Content- The whole book is divided into two parts-

Hints of some Homeopathic Medicines

What is materia medica

Word meaning of Materia Medica: - Medical material or the substances used in medicine.

DORLAND'S dictionary: - The branch of medical study which deals with drugs, their sources, preparations and uses.

According to Oxford Dictionary:- The study of the origin and properties of substances used in the practice of medicine.


According to Vocabulary.com: - The science or study of drugs, their preparation and properties and uses and effects.

Materia Medica:- It is a branch of medical science which deals with the origin, preparation, effect of drugs on human beings, their dosage and their mode of administration.

Homeopathic materia medica: - It is a record and collection of symptoms produced by a drug on healthy human beings. It also incorporate the observations of poisoning and overdosing. It is store house of carefully and faithfully recording of all altered sensations and functions,  all subjective and objective symptoms  experienced by provers. It has every action and reaction of drugs. Hahnemann was the first who tested and recorded all such findings in his book" Materia Medica Pura ( Reine Arzneimittellehre)"
at August 10, 2020 No comments:

Arsenic patient always feels vulnerable and they have various kinds of fear. These fears are interlinked and they always want to live careful, safe, secure and protected life. 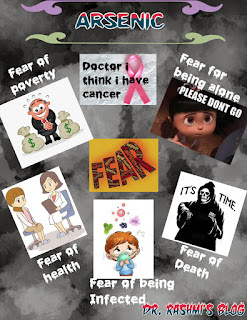 Review on Treatise on the Effects of Coffee by Dr. Hahnemann

For a perfect health and long life, we use mostly nutritive food and consume those things which are healthy or makes us healthy. We use some herbs, spices and medicament in our food or in drinks to make it tastier as well as gives us nutritional and medicinal benefits. But after some time, we are so much used to it that we can't even know that they become our habits. For examples: -  Herbal tea, coffee, spices etc.

According to Webster dictionary- "Medicament: a substance used in therapy".

According to Vocabulary.com- "Medicament: something that treats or prevents or alleviates the symptoms of disease".

The substances which are called medicament can produce two types of effects on body; first one is a morbific influence on a healthy organism and second one is the quality of annihilating the irregular and dangerous state of the body, which we call disease, that is, to transform it into a state of health. If we employed, except in cases of sickness, they are quite injurious to health. The frequent and dietetic use  of these substances which have medicinal properties disturbs the harmonious balance of our organs, weaken our health, and curtails our life.
Every medicament produces some specific changes  in the body of a healthy man, which properly belong to it. If we make use of  these medicament in case of sickness which have almost a perfect resemblance to the symptoms which the medicament can alone produce in a healthy body, a complete cure will follow. The justifiable and wise use of this medicinal substance, of which very few persons know the true value, but of which millions of men make a fatal use by using on frequent and on dietetic basis.

According to Hahnemann- "A beneficial medicament for a healthy person is a self-contradictory assertion".

Hahnemann also said- The more they resemble these last, and the more frequently and copiously they are introduced into our bodies, the more do they become equivocal and injurious to our health and opposed to longevity...........Wine was the only purely medicinal beverage of the ancients; but the Greeks and Romans, wiser than ourselves, never partook of it without having first mixed water with it copiously.

Medicinal products are substances alter the state of health and every such alteration is a condition opposed to nature, that is, a species of disease.We continue the use of these medicinal products (which we are enslaved by fashion and the force of example), which becomes our habit and calm the disagreeable sensations which they at first produce in us. These things finally please us by giving us relaxation in trivial indispositions but by their continued use  on the contrary, the agreeable effects which they apparently produce upon our organs insensibly become necessities.

And i think in this way Treatise of Effects of Coffee  became the precursor of homeopathic laws. Regarding the tiny doses of homeopathy, which  its prime feature, then once again, this measure was arrived at by Hahnemann entirely through his  empirical experiment and not through any a prior reasoning or incipient theoretical inclination.

"In Aphorisms 65 and 66 explore with detailed examples the primary and secondary actions of drugs. In Aphorism 68 says that only very small doses of drugs are required to stimulate and mimic the curative secondary effects that the vital force can mount to throw off a disease or a drug."

Samuel Hahnemann was indeed incorporated the laws in homeopathy by his distinguished  rare acumen...his clear judgement...his piercing intelligence, his profound and clear spirit of observation. Hahnemann's inquiring spirit had the fire like a youth. This inquisitive man had profound thoughtfulness and originality and was superior to most in having substantiated and carried out his doctrines into actual and most extensive practice.

Whole of the 18 th century in Europe marked by plethora of theories and hypothesis concerning the nature of disease and its causation ⇩...